The '10 Ford Shelby GT500 was a Hot Wheels casting based on the redesigned production car of the same name, debuted in the 2010 New Models. Carroll Shelby was a true hero for Ford Motor Company. The success of the 2010 Mustang was unchanged prior to its styling cues and the body work. This newly redesigned muscle car is powered the same 5.4-litre supercharged V8, which was been increased to 540 horsepower, the same amount of horsepower from the 08/09 GT500KR model. The '10 Ford Shelby GT500 was first shown at Barrett-Jackson in 2009 which was immediately sold at auction of $150,000 USD. 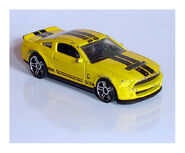 10' Ford Mustang Shelby GT 500 by Baffalie
Add a photo to this gallery
Retrieved from "https://hotwheels.fandom.com/wiki/%2710_Ford_Shelby_GT500?oldid=321535"
Community content is available under CC-BY-SA unless otherwise noted.