Even though the actual 1:1 2012 Mustang Boss 302 Laguna Seca has red side mirrors, the hotwheels version does not.

The car is named after the popular auto racing track, Laguna Seca Raceway, in California. The 2012 Boss 302 Mustang was faster around the track than a 2012 BMW E92 M3, a feat which the Laguna Seca Edition commemorates.

The '12 Mustang Boss 302 Laguna Seca is a Hot Wheels version of the actual car. 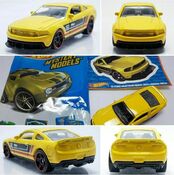 yellow laguna seca
Add a photo to this gallery
Retrieved from "https://hotwheels.fandom.com/wiki/%2712_Mustang_Boss_302_Laguna_Seca?oldid=321531"
Community content is available under CC-BY-SA unless otherwise noted.