The '16 Honda Civic Type R is a high performance variant of the Honda Civic. Code named as the FK2 Civic Type R, its production ran from 2015 - 2017 and is assembled in Swindon, England. This generation of Civic Type R saw the introduction of a turbocharged engine as compared to a naturally aspirated engine from previous Type Rs.

The '16 Honda Civic Type R has been released in the following 1/64 scale versions:

Born: 2016
Birthplace: Swindon, England
Designer: Honda
Specialty: If one of the fastest, most powerful, front-wheel drive cars in existence is what you're looking for, look no further than the 2016 Honda Civic Type R. Its 310-HP turbocharged engine will take you from 0-62 mph in 5.7 seconds. Not bad for hatchback! 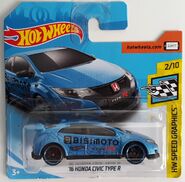 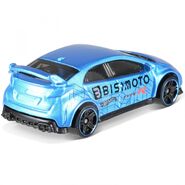