The Hot Wheels version features a detailed engine which is part of the base. The designer used a very clever technique where he made the interior Transparent Black. By making the seats consist of more plastic, they become almost black. But this nifty technique makes sure that the engine is still visible.

The '17 Pagani Huayra Roadster has come out in the following 1/64 scale versions:

Born: 2017
Birthplace: Modena, Italy
Designer: Horacio Pagani
Specialty: Awe-inspiring in every way from its gorgeous exterior to its couple-a-million dollar 720-HP, twin-turbocharged engine, the obscure Pagani Huayra Roadster was built for peak performance at any cost. 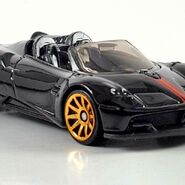 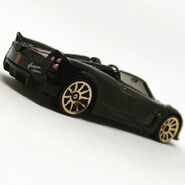 Add a photo to this gallery
Retrieved from "https://hotwheels.fandom.com/wiki/%2717_Pagani_Huayra_Roadster?oldid=353591"
Community content is available under CC-BY-SA unless otherwise noted.