The '32 Duesenberg SJ is a Hot Wheels casting which debuted in the collector-aimed (100% Hot Wheels) in the Classic Bodies 2-Car Set in 2003.

The real-life car, the 'Gurney Nutting Speedster' (Chassis 2614 J-585), was designed especially for the Maharajah of Indore, Yashwant Rao Holkar II. It was fitted with a supercharged straight-eight engine reputed to be capable of hitting 140mp/h. The 'speedster' body was crafted in London by coachbuilders 'Gurney Nutting Co.' and features long swooping lines, boat-tail rear, rumble seat and blue & red colored lights to show whether the Maharajah or Mahranee was driving among many other features. Due to the threat of war, the Maharajah took delivery of the car at his Santa Ana mansion in California where he enjoyed the car for some time before having it sent back to India after tensions had settled. The car remained in India until its rediscovery in 1959 where it was sold and sent back to the USA and still resides today in the hands of the William Lyon private collection.

The Hot Wheels version features a removable hood which reveals the engine compartment. It was only used three times before it was discontinued.

The '32 Duesenberg SJ has come out in the following 1:64 scale versions: 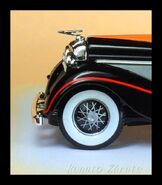 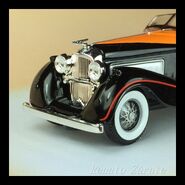 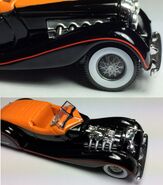 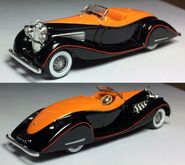 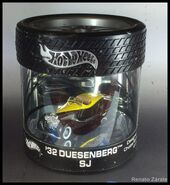 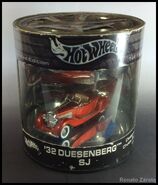 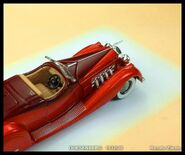