The '32 Ford Sedan is a Hot Wheels casting which debuted in the collector-aimed (100% Hot Wheels) Rod & Custom 2-Car Set. It is based on the real-life hot rod named 'Orange Crate' owned by Bob Tindle in the 1960's.

The real-life Orange Crate started life as a 1932 Ford Sedan (Tudor) which was already somewhat modified when bought by Bob in 1959. After appearing at the 1960 Portland Roadster Show, Bob decided to make an all-out show car. The Oldsmobile engine was enlarged to 417ci and a fully custom, chrome-plated tube chassis was built, and the body was modified to tilt up to reveal the excellent workmanship of the chassis. The Orange Crate was shown and won several awards at hot rod shows across the USA in 1961 to 1963 and also raced at the Winternationals where its best pass was 10.60 @140mp/h. It was retired from the show circuit in 1964 and after changing owners a few times, still exists today.

The Hot Wheels version features an opening front section and removable body which reveals the detailed engine, interior and chassis. It was used three times before being discontinued.

The '32 Ford Sedan/Orange Crate has come out in the following 1/64 scale versions: 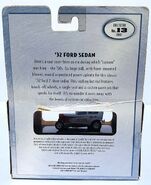 #54517 back
Community content is available under CC-BY-SA unless otherwise noted.
Advertisement