"To termites it is a meal on wheels, but to those of us with wood grain on the brain, the Woodie is a true taste of the west coast surfer culture - conjuring images of warm summer breezes, bikinis and the sun setting into the Pacific Ocean."

This casting was first released into the lineup in 1980 as a "Hi-Raker". This was a special series that allowed the rear axle to change its height when pulled down, changing the angle of how the vehicle sits, giving it a "raked" hot rod appearance. Only the very first release of the '40's Woodie had smooth side panels. All other versions released afterwards have a wood-grain texture to the side panels.

The '40's Woodie has come out in the following versions: 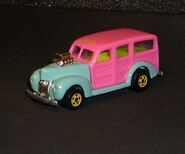 Retrieved from "https://hotwheels.fandom.com/wiki/%2740%27s_Woodie?oldid=363620"
Community content is available under CC-BY-SA unless otherwise noted.