Its first released is based on the Willys Gasser named 'Swindler II' driven by Doug 'Cookie' Cooke for the Stone & Woods team. The front of the box boasts that the car ran a quater-mile in 11.22 Seconds @ 126.93mp/h in 1965.

The Hot Wheels version featured an opening hood which revealed a detailed engine. It only saw seven releases before being discontinued.

The '40 Willys Gasser has been released in the following 1/64 scale versions: 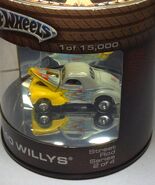