The '55 Chevy Panel made its debut as #37 2006 First Edition. It quickly became popular with both Collectors and Customizers.

The First Edition '55 Chevy Panel is Metalflake Blue with a metal body and metal unpainted chassis, and has "Hot Wheels Chopper" on the sides with an opening rear door that reveals a Chopper inside that pulls out. In 2016, the casting was retooled and the trunk can no longer open; however, the opening trunk was re-introduced in 2019 for a Convention release.

There is also a variation of the First Edition with a Black painted grill.

In posters, this casting was titled "Custom '56 Chevy Panel".

The '55 Chevy Panel has been released in the following versions: 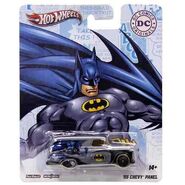 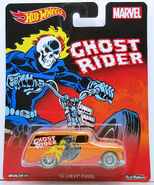 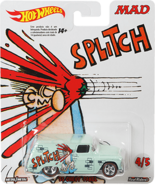 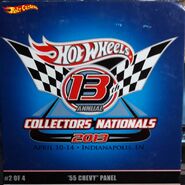 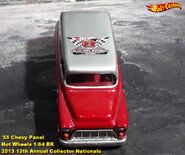 Retrieved from "https://hotwheels.fandom.com/wiki/%2755_Chevy_Panel?oldid=354097"
Community content is available under CC-BY-SA unless otherwise noted.