Designed by in-house Ford-fanatic Abe Lugo. The Lincoln Futura was a concept car created in 1955. Ahead of it's time, a futuristic look was created with the bubble top along with some radical fenders in the back as well as some specail treatment for the headlights and front grille. The concept car was presented in a Pearl White, just like the premiere issue of the Hot Wheels version. It was one of the first real world cars to sport a pearl paint. About a decade later, George Barris would get hold of the car, and turn it into one of the most recognizable and recreated cars to date, the Batmobile.

The '55 Lincoln Futura Concept has come out in the following 1/64 scale versions: 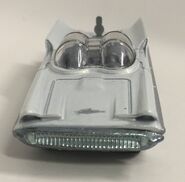 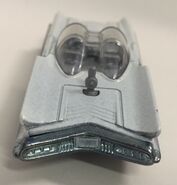 Add a photo to this gallery
Retrieved from "https://hotwheels.fandom.com/wiki/%2755_Lincoln_Futura_Concept?oldid=283399"
Community content is available under CC-BY-SA unless otherwise noted.