The Commercial Panel (US: Sedan Delivery) variant of the Classic Icon of British Motoring, the Morris Mini. The '67 Austin Mini Van is a small Commercial Panel van built in The UK under both the Morris and Austin marques, like the Austin Mini it was based off of. This Vehicle was popular throughout the British isles during the 1960s. Many Minis and subsequent variations of the Mini were brightly decorated thanks to the counterculture and rock 'n' roll in Britain at the time. Most Austin Vans however served as commercial service vehicles for the Royal Mail, tradesman,(Plumbers, contractors, electricians, etc.) and Courier companies. A classic British car, widely popular and a great addition to any collection.

The '67 Austin Mini Van has come out in the following 1/64 scale versions: 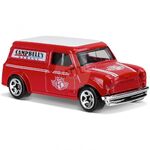