The '67 Shelby GT500 Casting was created by Hot Wheels designer Jun Imai for the Modern Classics Series. It is based on the Eleanor bodied version.

For 2011, a new casting was made. It features hood scoop detail at the front and vents on the sides, also the molded secondary headlights were removed. Finally the base was changed with less under-body detail on the middle in order to accommodate a bigger Hot Wheels logo.

The '67 Shelby GT500 casting has been released in the following versions: 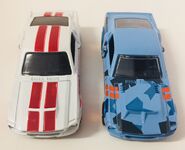