The '69 Dodge Daytona ('Tooned) is a heavily modified and cartooned car of the same name. It was ironically introduced in 2003, the same year the real life car, introduced in 1996, was being retired. The tooling for this car was modified in 2016; the engine was slightly changed: it now has an open blower, open side windows and gained an actual sculpted interior.

The '69 Dodge Daytona has come out in the following 1/64 scale versions:

DVB36 version in the package. 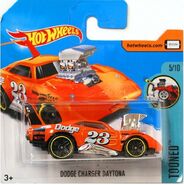 Add a photo to this gallery
Retrieved from "https://hotwheels.fandom.com/wiki/%2769_Dodge_Daytona_(%27Tooned)?oldid=397246"
Community content is available under CC-BY-SA unless otherwise noted.