The '69 Pontiac Firebird T/A is based off the actual production model that debuted in the 2005 First Editions. This American muscle car classic is powered by a 335-horsepower Ram-air V8 engine. Dave Weise, the designer for Hot Wheels cars, took inspiration for designing the actual car from his dreams. The initial code T/A, for this car stands for Trans Am, and this car lives up to its name in a celebrated racing series in a class of its own.

The '69 Pontiac Firebird T/A has come out in the following 1/64 scale versions:

From the back of the 2010 Muscle Mania card: 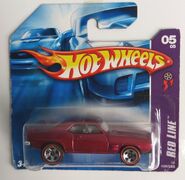 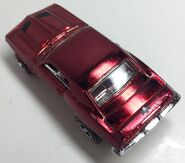 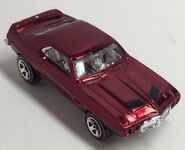