"You can make our tough one even tougher," the brochure explained, by adding Cowl Induction to the SS 396. Step on the gas, and a scoop opened "to shoot an extra breath of cool air into the engine air intake....like second wind to a distance runner."

The interior of this model has a roll-bar installed. The seat is part of the baseplate, giving this model a interior that consist of two colors.

The '70 Chevy Chevelle SS has come out in the following 1/64 scale versions: 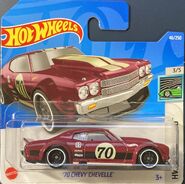