The diecast model includes working suspension and protrusions from the interior hold the axles in place. Though they are made from a flexible material, the axles are able to move up and down; like suspension. The spare tires are molded as part of the plastic window piece.

The '70 Dodge Charger has been released in the following 1/64 scale versions:

Born: 2015
Birthplace: Detroit, Michigan
Designer: Chrysler Corporation
Specialty: Modified with long travel suspension, limited slip differential and a tubular cage and armor, this epic Charger was built to pursue the enemy in outrageous high-speed chases – even after dropping 10,000 feet from a cargo plane! 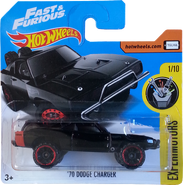 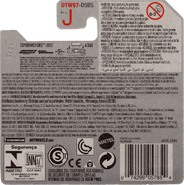 '70 Dodge Charger package back, showing the image with suspension.

Retrieved from "https://hotwheels.fandom.com/wiki/%2770_Dodge_Charger?oldid=367358"
Community content is available under CC-BY-SA unless otherwise noted.