Both castings share the same base, a similar body, the same dimensions, plastic wing and interior. The only outward difference between these two castings is their front fascia. The casting was apparently retooled in 2020 for the Nationals release, although it is not entirely clear what differences the retool has compared to the pre-retool. 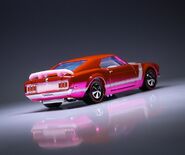