This casting was based on (and inspired by) the Monroe Handler Mustang II of 1977. Built by Monroe Shocks and Hot Rod magazine, the original Monroe Handler was built to showcase Monroe’s new Handler line of shocks. The building of the Monroe Handler was chronicled in Hot Rod Magazine June, July and August issues. A one-off production based on the Mustang II, the Monroe Handler had a number of significant improvements, including a Roush-tuned 363ci engine producing 400 horses and a modified suspension. The car also featured an upgraded exterior with steel IMSA-style fenders and other enhancements by Creative Car Craft.

The '78 Ford Mustang II has come out in the following versions: 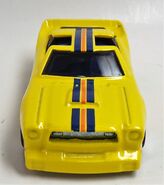