Hot Wheels Wiki
Register
Don't have an account?
Sign In
Advertisement
in: The Hot Ones, Speed Fleet, Larry Wood Designs,
and 52 more

The '80's Corvette is modeled after the planned GM 1983 Chevrolet Corvette. But no 1983 Corvettes were ever produced for commercial sales. Of the 43 prototype and assembly line test cars that were made up through early September 1982 - only one vehicle remains. It currently resides at the National Corvette Museum in Bowling Green, Kentucky on permanent display. When Corvette production resumed in January 1983, a decision was made by GM to sell those cars as an early production run of 1984 models.

This casting featured an opening hood and a two-tone interior. The window piece includes a painted roof and can be found in various opacity versions for most release years. This casting design does not have door mirrors included.

A similar casting was released in 1996, called the Corvette Coupe and is an Ex-Corgi casting. They are often mistaken for each other, the main difference is door mounted side mirrors. In 1990, the original casting was modified to include a 1-piece casting with a non-opening hood.

In 2022, the model was retooled and renamed "'84 Corvette". The new casting, although extremely similar in proportions to the previous, has several notable differences.

The '80's Corvette has come out in the following 1/64 scale versions:

This casting has a sealed and non-opening hood, and a slightly different rear clip.

The '80's Corvette has come out in the following retooled 1/64 scale versions: 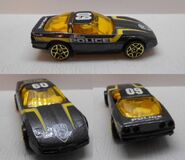 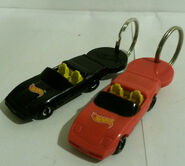 Red and Black
Community content is available under CC-BY-SA unless otherwise noted.
Advertisement