The DeLorean DMC-12 was originally designed by Giorgetto Giugiaro of ItalDesign in Turin, Italy. For the Mattel Hot Wheels release, the car was re-created by Manson Cheung. Text on the back of the packaging reads "Italian designed and British engineered, this American dream car with gull-wing doors, rear engine and stainless steel body was a sports car unlike anything else on the roads in the 1980s - or today!"

In late 2012, the Hot Wheels Red Line Club introduced a limited edition (4000 units) of a "doors up" version of the DeLorean. Designer Manson Cheung posted to a DeLorean enthusiast site:

Totally new sculpt. I reworked the car to better match the real car. I did not have my car when I made the first one for 2010 line. I took measurements off my car to make this one the best (as it may be the last) DeLorean that Hot Wheels can make. Although, some sacrifices were made (wheel size, graphic application, opening feature) because of production limitations. Also, this one is an Automatic, all others were Manual. Packed with doors open in same blister as RLC BTTF2. Limited to 4000. Available only through HotWheelsCollectors.com, and soon at delorean.com.

Another pic of Gold interiors

back of short card 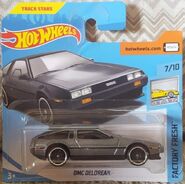 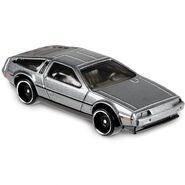 De Lorean by Baffalie
Add a photo to this gallery

Retrieved from "https://hotwheels.fandom.com/wiki/%2781_DeLorean_DMC-12?oldid=370083"
Community content is available under CC-BY-SA unless otherwise noted.