The '85 Honda CR-X depicts the JDM Model of the Honda CR-X, Mugen-converted into a mid-engined race car. The Honda CR-X was a Sports Compact-class FF Layout sports car produced by Honda In Japan from 1983-1991 with years ranging from 1984 to 1991. in 1985, the CR-X was available with a 1.5 liter engine, which was popular in the Japanese market. The CR-X was similar in design to the Fourth Generation Honda Civic in layout and styling, but was based off a 3rd-generation Civic, even though there are some styling similarities and mechanical overlaps.

As of 2016 this casting is modified. The body no longer consists of two parts. On the casting, the roof scoop sits directly above the metal piece holding the body onto the base, cutting through the top of the engine in the back of the interior piece, making it look like it's part of the air intake from the roof. 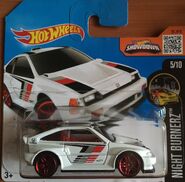 Add a photo to this gallery
Retrieved from "https://hotwheels.fandom.com/wiki/%2785_Honda_CR-X?oldid=239134"
Community content is available under CC-BY-SA unless otherwise noted.