The Acura NSX was an exotic sports car developed by Honda starting in the mid 1980s for global markets. The NSX was Honda's first Supercar and in North America was launched under the Acura brand name, which was created to give Honda's more prestigious models a better image. The NSX's bodywork was constructed out of aluminum (UK: aluminium), which shaved a great deal of weight from the car. As of 2017, this is the oldest model of Acura made by Hot Wheels.

The '90 Acura NSX has been released in the following 1/64 scale versions:

Born: 1990
Birthplace: Tochigi, Japan
Designer: Honda Motor Company
Specialty: Mid-engine, rear-wheel-drive sports car designed to balance usable power and reliability. With a naturally aspirated VTEC engine, it's suitable for the extreme demands of both road and track, and is considered to be one of the most reliable exotic cars ever made.

All but the STH and Target Exclusive

Front View of the NSX 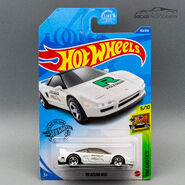 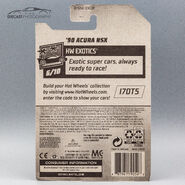 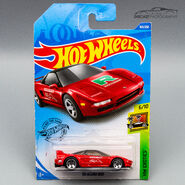 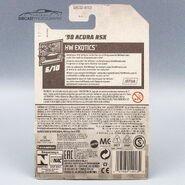