Hot Wheels Wiki
Register
Don't have an account?
Sign In
Advertisement
in: Hi-Rakers, Larry Wood Designs, The Heroes,
and 13 more

The 'Vette Van is a Hot Wheels casting designed by Larry Wood. The name implies that Larry Wood took the Corvette as a source of inspiration, but Mattel/he has stated that the casting is based on an MPC 1/25th scale model kit called the Vette Van..

The model kit was most likely inspired by the conversion kits available from Ecklers for the later era C3 Corvette body style with a fixed rear window. Later on Greenwood worked with Ecklers to develop a modified conversion kit for the earlier C3 models with removable rear windows. Together they often referred to as the Shooting Brake Corvettes and can still be occasionally found 'up for sale' among their other Corvette cousins.

The Corvette design cues can be seen in the front nose details. On the hood with its iconic hidden headlights and the shortened cold air intake design at the base of the window. Along the curved front and rear fender arches. And at the front of the roof line you can see the classic Corvette T-top design with its roof panels out. At the rear end of the model the 4 round frenched taillights catch the eye and say Corvette to everyone it passes. There is a huge gas tank you can see in the back window. Letting this van always got some miles ahead of everyone else. A battery is mounted to the right side of the gas tank. The big block engine is also mounted inside the van portion of the casting just behind the front seats so that it matches up to the side exhaust tips.. Making this a mid-engined 'Vette Van.

As this diecast model is also from the Hi-Rakers series, the rear wheel sets are attached to an adjustable plastic base insert. This allows the rear end to be be raised or lowered to 3 different height positions.

The 'Vette Van has come out in the following versions: 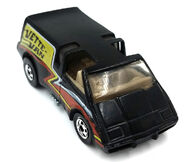