100th Anniversary of The Automobile in America 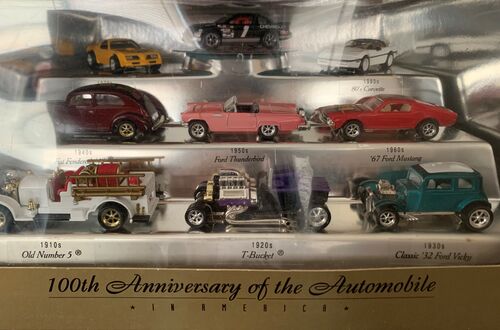 This set back from 1996 is quite an interesting piece of a display as it showcases 100 years of the Automobile in America. On June 4, 1896 Henry Ford took to the street with his Quadricycle. 100 years later (and going) America is one of the biggest leaders in the automotive industry, whenever it is by design, speed, or safety.

The set is also remarkable for a point in Hot Wheels history. The cars used in the set are a mix of normal Hot Wheel cars, Vintage Series Redline era cars that Hot Wheels reissued a couple years prior, and a couple of Category:Ex-Corgi castings. Also back in the 90s, Real Riders was not the choice for wheels but rather PC6 wheels which are used on every car in this set. And lastly, it wouldn't be the 90s without a NASCAR Pro Racing casting thrown into the set. A great reminder of what Hot Wheels was like in the 90s.

The Monte Carlo Stocker is also the closest variation to the 90s Dale Earnhardt Goodwrench car. The reason why Hot Wheels did not do an exact replica of "The Intimidator" car is probably due to licensing.

The following vehicle was included in the 100th Anniversary of The Automobile in America: