The Chrysler Airflow is a full-size car produced by Chrysler from 1934 to 1937. The Airflow was one of the first full-size American production car to use streamlining as a basis for building a sleeker automobile, one less susceptible to air resistance. Chrysler made a significant effort at a fundamental change in automotive design with the Chrysler Airflow, but it was ultimately a commercial failure. The car was introduced months (in January, 1934) before it was put in production, and production peaked at only 6,212 units in May 1934 — very late in the year and barely enough to give every dealer a single Chrysler Airflow. The factory had not accounted for significant manufacturing challenges and expense due to the unusual new Airflow design, which required an unprecedented number and variety of welding techniques. The early Airflows arriving at dealerships suffered from significant problems, mostly the result of faulty manufacturing. According to Fred Breer, son of Chrysler Engineer Carl Breer, the first 2,000 to 3,000 Airflows to leave the factory had major defects, including engines breaking loose from their mountings at 80 mph (130 km/h).

The 1934 Chrysler Airflow has come out in the following 1/64 scale versions: 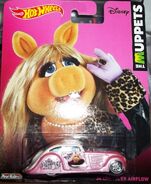 Add a photo to this gallery
Retrieved from "https://hotwheels.fandom.com/wiki/1934_Chrysler_Airflow?oldid=361704"
Community content is available under CC-BY-SA unless otherwise noted.