1957 Corvette was the first with fuel injection, and the first car, as it's slogan says, with "One HP per cubic inch"; it has a 283 cu in small-block V8 engine which produced 283HP.

The 1957 Corvette debuted in the 50th Anniversary of Corvette 2-Car Sets in the collector-aimed 100% Line. It has an opening hood and detailed engine. It was only released four times until the 100% castings were discontinued. It is very similar to '58 Corvette casting but with smaller body. 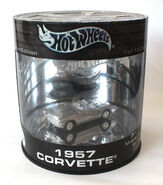