The 1957 Oldsmobile Stock Car is a Hot Wheels casting which debuted in the collector-aimed (100% Hot Wheels) The Petty Racing Family 3-Car Set. It features an opening hood which displays a detailed engine. It was used seven times before being discontinued.

The 1957 Oldsmobile Stock Car has come out in the following 1/64 scale versions: 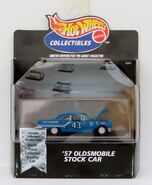 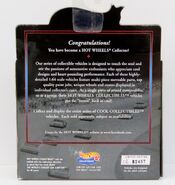 If this was your father's Oldsmobile, the ol' man had great taste in '50's Motown street machines. The lines of this classic are unmistakeably General Motors as they seemed to own the patent on cool designs during the era. The J2 motor boasted 3 carbureters and horsepower to burn ... rubber. This Olds is for the young at heart who still think that S.T.O.P means 'squeal tires on pavement'!

This '57 Olds is jokingly referred to by its owner, Doug Mockett, as 'Olds en nombre solamente', meaning 'Olds in name only'. Beneath its GM skin, Doug has created a one-of-a-kind racer with a 525-hp mill, which he drove to victory in the 2002 La Carerra Panamerican race. Capable of hitting 170mph, Doug's car defeated 80 other worthy participants in the 2,400 mile race from southern to northern Mexico. This is one coche caliente!