This casting is based on the truck that Rick Simon drove in the TV show "Simon & Simon." The casting was slated to appear as part of the Heritage line in 2015 however it was stated by HWC Gary that the tool for this casting has been lost. The casting was then replaced with the Bubble Gunner in the lineup. Evidently the casting has been found again, for it showed up with a second version in 2016 for the Pop Culture - DC Comics series.

The 1980 Dodge Macho Power Wagon has come out in the following 1/64 scale versions: 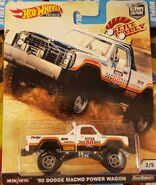 Desert Rally Card
Add a photo to this gallery
Retrieved from "https://hotwheels.fandom.com/wiki/1980_Dodge_Macho_Power_Wagon?oldid=326837"
Community content is available under CC-BY-SA unless otherwise noted.