The 1982 Corvette is a Hot Wheels casting which debuted in the collector-aimed (Hot Wheels Collectibles) Corvette Showcase 45th Anniversary 2-Car Sets. It featured an opening hood which revealed a detailed engine. It was used five times before being discontinued.

It is based on the real life 1982 year model Corvette.

1982 marked the final year of the "Mako Shark" body style, as well for the name Sting Ray, which had first appeared nearly twenty years before. Thus Chevy designers and engineers went out of their way to produce a refined, powerful, high-performance Corvette Sting Ray. They were extremely successful in their efforts as today the 1982 Corvette is as much an eye-catching attention-getter as it was in '82.

All '82 models were equipped with a new 4-speed automatic transmission with overdrive. Its 350 cu in V-8 engine featured electronic fuel injection known as "Cross-fire Injection". This computerized system increased horsepower and reduced emissions at the same time.

The 1982 Corvette has come out in the following versions: 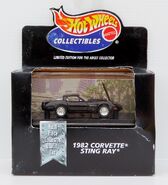 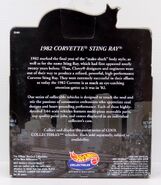