"NASCAR racing is indeed a contact sport! During a four or five hundred mile race a car will rub tires, scrape walls and have track grime splattered on its hood and windshield. To celebrate this exciting fender-to-fender action Hot Wheel Racing is offering a special series of four "race-worn" Trading Paint cars." For the 1999 Pro Racing line, the Trading Paint series was limited to just four cars, with only 15,000 of each made.

"The typical NASCAR pit crew consists of 9 members: Driver, Crew Chief, Gas Man, Fuel Catchman, Signboard, Jackman, Tire Carrier, Rear Tire Changer and Front Tire Changer, however only 7 are allowed over the wall during a stop.
During an average 20-second pit stop the team will accomplish the following tasks: 14 seconds are spent pouring two 11-gallon cans of 110 octane leaded fuel into the gas tank, in 1-1/2 pumps of the jack handle the car is lifted and 10 lug nuts are removed within 7 seconds (per side), new tires are put on, the chassis is adjusted, a plastic windshield overlay is removed, the driver gets a drink of water and is back on the track. And all of this takes place in less time than it took you to read about it."

"Before the custom paint jobs and sponsors logos are affixed to your favorite driver's cars, the vehicles go through hundreds of hours of pre-season testing.
Hot Wheels Racing Test Track edition salutes those technicians who tune and tweak the engines, transmission and suspensions to achieve peak performance before the war paint is applied."

"Are you ready to rock 'n' race? Well, all right, then!!! So is NASCAR! Fast cars and rock and roll have been closely linked since the early '50s. In celebration of the excitement created by screamin' cars and wailing guitars, Hot Wheels Racing has produced a special series of your favorite 1:64 scale cars with collectible die-cast guitars. So, start your engines, turn up the radios and race out to collect all the NASCAR Rocks America edition cars."

In this series, each set came with two stock cars. One was a 1/64 scale version of a particular racer, and the other was a larger scale (usually 1/24 or 1/43 scale) of the same car. Sometimes the larger scale car would be a unique variation of the team's NASCAR, while the 1/64 version was a duplicate of the 1999 Pro Racing Series. That is except for the cars listed below:

Toy Story 2 was released in 1999. To commemorate the release, the Cheerios #26 car and the Hot Wheels #44 car were decorated in Toy Story 2 decals. The real cars raced during the NAPA 500 in Atlanta Motor Speedway on November 21, 1999. Only available through exclusive offers of General Mills cereals. There were two different sets to come out. The first had the two cars as Basic casting variations which can be found here. The other was the Premium casting variations which are listed below. 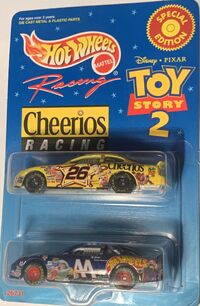 "How does a pit crew get around the track before, during and after a NASCAR event? They race back and forth in what we call Pit Cruisers - cool golf carts bearing the authentic team colors and graphics. Now, Hot Wheels Racing is offering a special series of four Pit Cruisers for your collection."
Production limited to 15,000 each.

Tool boxes were accessories that came with cars in the Pro Racing Pit Crew series.