This is an accurate reproduction of BMW's "New Mini"; the first major redesign of the classic British microcar since its debut as the "Morris Mini-Minor" and "Austin 7" in 1959. Veteran Mini-racing guru John Cooper was reportedly delighted that BMW had honored him by naming the sporty version of the new car after him; unfortunately he died shortly before the car's launch. This version is a Mark Jones version of the 2001 Mini Cooper; for Phil Riehlman's version of the 1960s car see Mini Cooper.

The 2001 Mini Cooper has come out in the following versions: 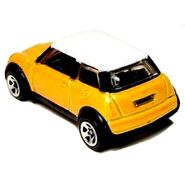 Retrieved from "https://hotwheels.fandom.com/wiki/2001_Mini_Cooper?oldid=322096"
Community content is available under CC-BY-SA unless otherwise noted.