For SEMA 2014, Action Vehicle Engineering worked with Hot Wheels on this 2005 Ford Mustang project. The wheels were made special for Hot Wheels, and the whole vehicle was meant to be envisioned as a Japanese style race car. It also has a special wrap design, with decals giving special thanks to Sparco, Falken Tires, KW, Fifteen 52 and Clarke Designs (see the Gallery section for pictures). The diecast model features a adjustable front splitter for either display-ability or use on the orange tracks. This car also appeared with the Bone Shaker in the video game Forza Motorsport 6 and it made its return in both Forza Horizon 3 and 4.

The 2005 Ford Mustang has come out in the following 1/64 scale versions:

Born: 2016
Birthplace: El Segundo, CA USA
Designer: Hot Wheels®
Specialty: Created for the 2014 SEMA show, this 2005 Ford Mustang pays homage to the Mustang's 50th Anniversary. With a solid 430 hp engine, vortech supercharger and custom, full roll-cage, not only does this pony look street-ready, it drives like the true muscle car it is.

the rear wheels are the same as the front wheels 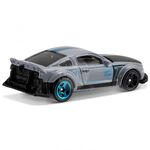 Add a photo to this gallery
Retrieved from "https://hotwheels.fandom.com/wiki/2005_Ford_Mustang?oldid=331387"
Community content is available under CC-BY-SA unless otherwise noted.