A special edition of the car was produced at the end of the 2011 IndyCar season. It featured Dan Wheldon's paint scheme. Dan Wheldon, was a IndyCar driver that competed in the 2011 season but was killed on lap ten of the IndyCar season finale.

The word "IndyCar" is a racing sanctioning body and the trademark name of the top-level Series of American open-wheel racing, created by Indianapolis Motor Speedway, the "brickyard".

This 2011 casting represents the last year of the conventional-looking open wheel chassis; the Dallara IR-05, characterized by having a V8 engine and completely exposed rear wheels.

The 2011 IndyCar Oval Course Race Car has been released in the following 1/64 scale versions: 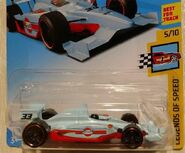 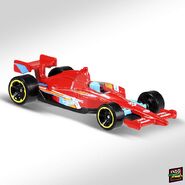 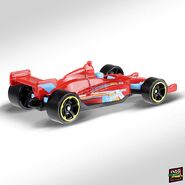 2019
Add a photo to this gallery
Retrieved from "https://hotwheels.fandom.com/wiki/2011_IndyCar_Oval_Course_Race_Car?oldid=395076"
Community content is available under CC-BY-SA unless otherwise noted.