In 2014 New Models are incorporated throughout different series in the mainline instead of being a singular series. Packaging denotes "New for 2014" under the Hot Wheels logo to indicate the vehicle is a new casting. See List of 2014 Hot Wheels.

The following photographic guide is intended to give the reader a good idea on casting variations for the entire range of 2014 New Models. It is not a complete variation guide. 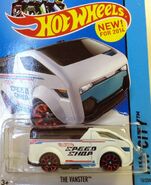