"In 1968 Mattel introduced the very first Hot Wheels vehicle. Since then millions of kids have grown up with the Hot Wheels family of cars and trucks. Now it’s our turn to say ‘thank you’ for 20 years of support! Hot Wheels is proud to present our 20th anniversary “Special Collector’s Edition” car, a sleek chrome-plated vehicle embossed with a striking 20th 20th anniversary logo! There are six different chrome-plated cars representing most of the Hot Wheels segments." (from the back of the 20th Anniversary 3 pack)

For the 20th anniversary Mattel launches twelve 20th Anniversary 3 packs (thirteen if you count the variant of the pack number 6).

Since there is no way to differ the 12 packs a number was chosen following the order on the backcard. The first 6 seem to be the rarest packs, namely the gold ones along the chrome ones that are hard to find; the remaining 6 packs seem to be more common. 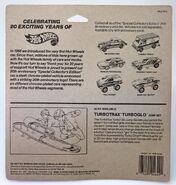 Pack 6 variant
Add a photo to this gallery
Retrieved from "https://hotwheels.fandom.com/wiki/20th_Anniversary_3-Pack?oldid=279733"
Community content is available under CC-BY-SA unless otherwise noted.