The 24/Seven is an original tuner car similar to the third generation Mazda RX-7(FD3S). In 2014 the spoiler was retooled closed.

The 24/Seven has been released in the following 1/64 scale versions:

24/Seven was simultaneously introduced as a 2003 First Editions model (with a Plastic chassis) and as a World Race model (with a die-cast chassis); this was the first time this was ever done! 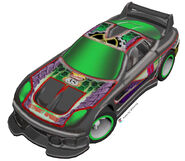 Ricky Bell, of the Street Breed team, driver of the 24/Seven in the 2003 film "Hot Wheels World Race"