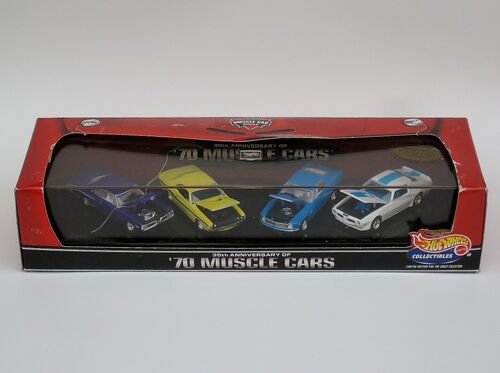 It was the best of times. It was the worst of times. 1970 marked the pinnacle of the great Motown muscle car era, with maximum horsepower and accelerating speeds. But sadly, it also marked the beginning of the end for these 4-speed, big block, boulevard bruisers. During the years that followed, manufacturers were plagued by safety issues, government restrictions, skyrocketing insurance premiums, and gas lines longer than drag strips - and the three big muscle car manufacturers were doomed to the fate of the dinosaurs.

Now, after three decades we look back and savor the memories of these magnificent machines and celebrate the 30th anniversary of 1970's Muscle Cars. Check 'em out.

The following vehicles were included in the 2000 30th Anniversary of '70 Muscle Cars 4-Car Set:

Box Rear
Add a photo to this gallery
Retrieved from "https://hotwheels.fandom.com/wiki/30th_Anniversary_of_%2770_Muscle_Cars_4-Car_Set?oldid=344237"
Community content is available under CC-BY-SA unless otherwise noted.