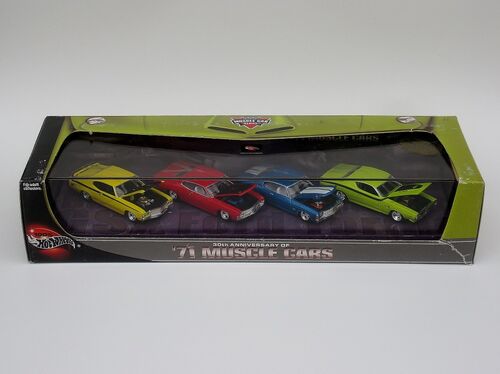 In 1971, America's big three auto struggled against government safety regulations and escalating insurance premiums, but Motown's muscle cars were still popular among those who rebelled against foreign imports with four-banger engines and speedometers that barely reached three digits. Muscle cars may be on the road to becoming extinct, but they were still magnificent examples of Detroit's ability to produced technical wonders we really wanted.

After three decades we look back and savor the memories of the Ford Torino, the Dodge Charger, the Chevy Chevelle SS, and the Buick GSX, four of Motown's most muscular and magnificent machines. Now, you can celebrate them with this 100% Hot Wheels 30th Anniversary of the 1971 Muscle Cars Set.

The following vehicles were included in the 2001 30th Anniversary of '71 Muscle Cars 4-Car Set:

Box Rear
Add a photo to this gallery
Retrieved from "https://hotwheels.fandom.com/wiki/30th_Anniversary_of_%2771_Muscle_Cars_4-Car_Set?oldid=344236"
Community content is available under CC-BY-SA unless otherwise noted.