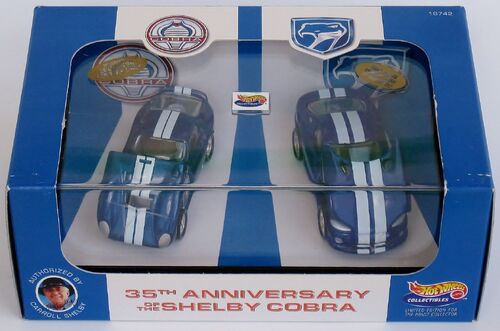 The moment Carroll Shelby dropped a high-performance 289 cu. in. Ford engine into the lightweight body of a British Ace roadster, the retired auto racer became the producer of world-class sports cars. His newborn Cobra, often called "the fastest street car in the world", quickly established a reputation that has endured for decades.

This 35th Anniversary car set commemorates the Shelby Cobra, and the Cobra-inspired, 450 horsepower Dodge Viper GTS. Each of these celebrated vehicles possess undeniable charisma and all but unbeatable performance - the hallmark of Carroll Shelby.

The following vehicles were included in the 35th Anniversary of the Shelby Cobra 2-Car Set:

Add a photo to this gallery
Retrieved from "https://hotwheels.fandom.com/wiki/35th_Anniversary_of_the_Shelby_Cobra_2-Car_Set?oldid=350129"
Community content is available under CC-BY-SA unless otherwise noted.