The 40 Somethin' is a Hot Wheels Original Design patterned after the famed Ford GT-40. Its design ran parallel to that of Ford's 100th anniversary redesign of the same car. Both launched in early January 2002 with neither company aware of the other's design. The Hot Wheels model is a much more modern interpretation, featuring graphics depicting members of Eric Tscherne's family.

The 40 Somethin' has come out in the following 1/64 scale versions: 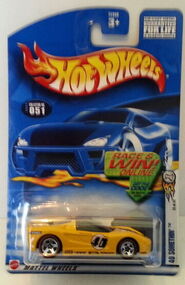 Add a photo to this gallery
Retrieved from "https://hotwheels.fandom.com/wiki/40_Somethin%27?oldid=331950"
Community content is available under CC-BY-SA unless otherwise noted.