In 2018, Hot Wheels celebrated their 50th Anniversary by releasing several special series including the Black & Gold Series. This was the first of the Anniversary Series.

From the Back of the Card:

Everything is golden during Hot Wheels 50th Anniversary! And this Black & Gold collection is no exception. Featuring iconic Hot Wheels originals and American Classics from the sixties, each car carries a stunning livery and comes showcased in a beautiful matching package that commemorates Hot Wheels Golden Anniversary. 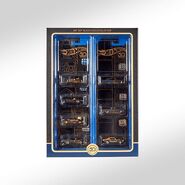 Add a photo to this gallery
Retrieved from "https://hotwheels.fandom.com/wiki/50th_Anniversary_Black_and_Gold_Series_(2018)?oldid=397972"
Community content is available under CC-BY-SA unless otherwise noted.