Although this series is representative of the 'Sweet 16' from 1968, none of the vehicles are the exact same castings.

The following vehicles were used in the 50th Anniversary Originals Series: 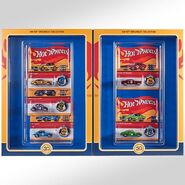 Add a photo to this gallery
Retrieved from "https://hotwheels.fandom.com/wiki/50th_Anniversary_Originals_Series?oldid=331446"
Community content is available under CC-BY-SA unless otherwise noted.