The A-Team Van (sometimes called 'Custom GMC Panel Van') is a Hot Wheels casting which was designed by Manson Cheung and debuted in the 2011 New Models Series. It is based on the 1983 GMC Vandura driven and owned by the character B.A. Baracus in The A-Team television series.

The A-Team Van has come out in the following 1/64 scale versions:

Born: 1983
Birthplace: Detroit, Michigan, USA
Designer: General Motors
Specialty: Owned and operated by master mechanic B.A. Barachus, this is the official mode of transportation for the A Team. It is able to withstand accidents, gun battles, insane jumps, and being stripped apart on a regular basis - only to be put back together by B.A. for the next adventure. 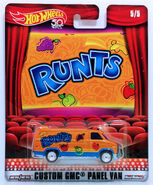 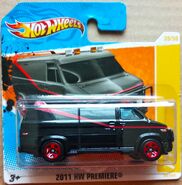 Retrieved from "https://hotwheels.fandom.com/wiki/A-Team_Van?oldid=321488"
Community content is available under CC-BY-SA unless otherwise noted.