Amazoom is a Hot Wheels casting designed by Mark Jones that debuted in the 2008 New Models.

The origins of this casting arose when the Hot Wheels Marketing group decided to recognize Brazil for the growth of the Hot Wheels brand in that country during 2007. Several design options were presented to Marketing and Design, who eventually decided to create a non-licensed version of the stock cars that are popular on the Brazilian racing circuit. Mark Jones took that concept and created Amazoom. The name of the car came from the Amazon River, which runs through the Brazil. Its first deco is based on the Brazilian flag.

The Amazoom has come out in the following 1/64 versions:

Born: 2008
Birthplace: El Segundo, California, USA
Designer: Hot Wheels®
Specialty: With a ground effects package, race suspension, and a roll bar, this Brazilian race car was made to ride the narrow streets of the concrete jungle.

Unpackaged Amazoom (Front and side) 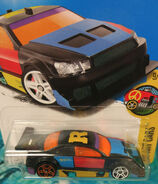 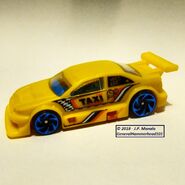 Add a photo to this gallery
Retrieved from "https://hotwheels.fandom.com/wiki/Amazoom?oldid=417321"
Community content is available under CC-BY-SA unless otherwise noted.