This ambulance is not to be confused with the Ambulance vehicle of the same name that was released in 1970. This car was featured in the PC game, Hot Wheels: Bash Arena. It had a High attack and Defense, and moderate Handling, but low speed and Acceleration. In the game, it was purple and had a Woolly Mammoth on it.

The Workhorses version of the Ambulance has come out in the following 1/64 scale versions:

no white in City of Hot Wheels tampo 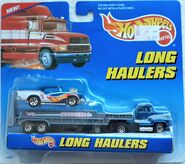