The Arrow Dynamic is a small single-seater car which seems to go well for use in some forms of open wheel racing. In 2016, the tooling was updated very slightly; the base was very slightly changed, and the exhaust part does not appear to rattle around as much any more when compared to earlier versions of the casting. It is one of the best track cars made by Hot Wheels.

The Arrow Dynamic has been released in the following 1/64 scale versions:

Born: 2013
Birthplace: El Segundo, CA USA
Designer: Hot Wheels®
Specialty: Single-seat racer with plenty of power. It's aerodynamically designed to keep the tires on the track while speeding past the competition. 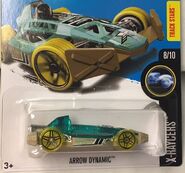