For over 50 years, Aston Martin has been the sports car of choice for James Bond. Produced exclusively for Spectre, the Aston Martin DB10 was designed, engineered and hand crafted by a dedicated team at Aston Martin’s Gaydon Headquarters in the UK. 10 DB10 cars were manufactured in total – eight have been used for Spectre filming, along with two show cars. On 19 February 2016, one of the two "show cars" was sold at auction for £2.4 million ($3.4 million).

The Aston Martin DB10 has come out in the following 1/64 scale versions: 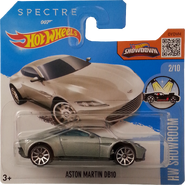 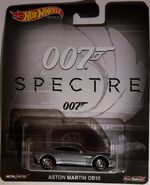