The Backdrafter is a Hot Wheels original model that is designed by Ryu Asada. It's modeled after a fire truck. It's a hot rod fire truck! It has two massive V16 engines, eight exhausts, a large rear wing and sports maybe the biggest rear tire ever used on a Hot Wheels model. It even has a parachute on the back for slowing down at drag races.

The Backdrafter has been released in the following 1/64 scale versions: 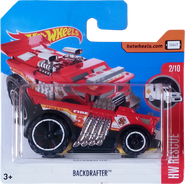