The Ballistik is a Hot Wheels creation designed by Alec Tam. It was originally released as a First Edition in 2002 and prominently featured in the 2003 television series, Highway 35 World Race. It was also briefly shown in one scene of the AcceleRacers in 2005. (Hwy35 World Race "real world" specs:) The Ballistik has a 730hp aluminum, twin turbocharged, 64 valve U8 with intake and exhaust add-ons connected to a 7-speed transmission. The car has a carbon fiber body with magnesium chassis. The Ballistik's engine is almost mid-mounted and the cockpit is in the back, much like the Dodge Viper. The car features a low slung body with high fender arches. It also has 18" wheels with 17" 8 piston carbon ceramic brakes and double wishbone suspension.

The Ballistik has been released in the following 1/64 scale versions:

In Hot Wheels: World Race, the Ballistik has two circular taillights in the place of the exhaust pipes 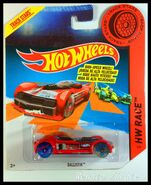