This casting is a rendition of a sports car which a Barbie Extra doll can be packaged with as part of a larger bundle. It features a mid-engine design and scissor doors shaped like wings. A life-sized version based on the Fiat 500e debuted at the 2021 Los Angeles Auto Show, unveiled and presented by Ted Wu; this life-size version of the car was largely hand-built and is fully-functional. This car does not have an official name and is simply referred to as the Barbie Extra Car by Wu during his presentation during its life-sized version's unveiling and the Barbie Extra Vehicle in the toy's listing on the Mattel website.

The sports car was originally designed by Judy Choi, a designer in Mattel's Barbie division; Kevin Cao later took the design and recreated it in various scales, including this model. The hood opens to act as a fashion closet and storage cubby while the rear portion where the engine would be is a miniature swimming pool for a pet. The life-sized car features rainbow-colored five-spoke rims, a holographic glittery finish and synthetic fuzz on the seat headrests. For its size the casting is notably very heavy with a centered weight distribution.

The Barbie Extra has come out in the following 1/64 scale versions:

Born: 2021, El Segundo, California
Designer: Hot Wheels®
Grab your swimsuit and jump into this Barbie® Extra dream car! Ride top down in style, and dip into the pool on those extra hot days. 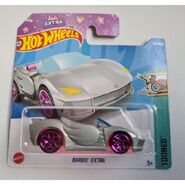